, /PRNewswire/ -- (NYSE: MKC), a global leader in flavor, announced Birhane Gebreselase and as the 82nd and 83rd recipients of the Charles Perry McCormick Scholarship, worth over four years. 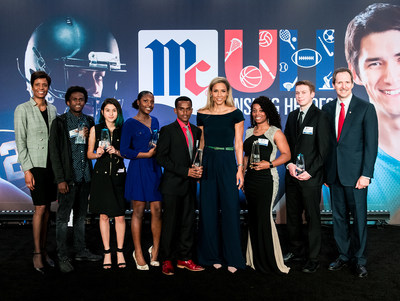 The keynote remarks were delivered by Lori Susan "Lolo" Jones, a three-time Olympian who represented on the 2008 and 2012 Track & Field teams and the 2014 Bobsledding team. , a veteran area sports radio personality, served as the master of ceremonies for the 27th consecutive year.

Mr. Gebreselase and Ms. Coles were chosen from a total of 111 honorees who were recognized as Unsung Heroes this year, nominated from 68 Baltimore-area public, private, parochial and independent schools.  McCormick is proud to continue the tradition of honoring students throughout the region.  In a time where there is a spotlight on the city, troubling stories dominate the news and hope is hard to come by for many – it is critical for the business leaders who call home to lift up the community.

Mr. Gebreselase, a soccer player at in , has used soccer to channel incredible hardships and overcome obstacles.  As a young child, he escaped persecution in and spent six years alone in a refugee camp in before he could get to to reunite with his mother and brother.  When he arrived as a 9th grader, he knew no English but went to school and soccer practice every day with a positive attitude and a smile.  From his first day of school, he pushed himself in class, on the field, and to grow as a human being. He has never missed a practice or day of school in over three years and has led his team and peers by example.  His coach remembered a Saturday before a Monday game where Mr. Gebreselase, only one of two players who showed up in the pouring rain, was the first one there and running laps to prepare.  He is the definition of an unsung hero.

Ms. Coles comes from , a magnet high school in .  The Lewis School serves some of the most vulnerable students coming out , offering the opportunity to study a specialized curriculum designed to ease college preparedness.  A member of the school's volleyball team, she was selected for her unselfish behavior and good sportsmanship.  Ms. Coles' coaches and teammates also praise her for her stellar leadership, consistent support of her team and dedication to doing whatever it takes for her team to be successful.

McCormick's Unsung Heroes program was founded by the late in 1940.  The mission of the program is to recognize athletes for unselfish team play and highlight the efforts of those who contribute to the success of their teams without acclaim.  In 1969, the scholarship component of the award was added to the program in his honor, and to date, has awarded over to deserving student-athletes. The Charles Perry McCormick Scholarship is awarded to one female and one male student-athlete each year and is worth over four years.

McCormick & is a global leader in flavor.  With in annual sales, the company manufactures, markets and distributes spices, seasoning mixes, condiments and other flavorful products to the entire food industry – retail outlets, food manufacturers and foodservice businesses.  Every day, no matter where or what you eat, you can enjoy food flavored by McCormick.  McCormick Brings the Joy of Flavor to Life™.