, /PRNewswire/ -- (NYSE: MKC), a global leader in flavor, announced and as the 86th and 87th recipients of the Charles Perry McCormick Scholarship, worth over four years. To date, the company has awarded over in scholarships to deserving student-athletes. 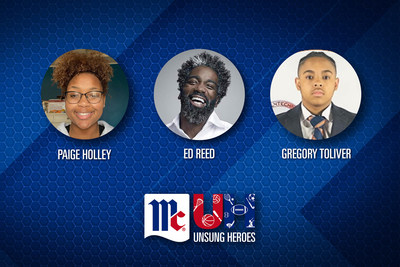 Keynote speaker, , Hall of Fame Safety for the , addressed the student-athletes. "Surround yourself, and continue surrounding yourself, with good people. You have to have a great team around you because that's what you're going to need going forward." said Reed. "Think about how they influence and motivate you."

and were chosen from 100 Baltimore-area student-athletes recognized as Unsung Heroes this year.

, a member of the women's lacrosse team at , showcases her work ethic and tenacity on the lacrosse field. When the team needed a goalie, even as a field player, she stepped up to learn new skills to benefit the team. During the pandemic, she also volunteered to be a group leader during the team's virtual practice sessions. Serving as the team's morale booster, in the words of her coach, "She has the best attitude no matter what her role is that day." She sets the standard for unselfish team play and is a true unsung hero.

, a football player at , excels on and off the field. A de facto tutor for the football team, he led virtual meetings during the pandemic, ensuring that sophomores joining the varsity team learned about the team's defense. A lifelong athlete, he also gave up his place on the school's golf team so he could attend Saturday workouts for football. Even as he worked two jobs to help support his family during the pandemic, said, "I won't allow my work to become a distraction for my love of playing the game of football." He is the definition of an unsung hero.

McCormick's Unsung Heroes program was founded by the late , Sr. in 1940. The mission of the program is to recognize athletes for unselfish team play and highlight the efforts of those who contribute to the success of their teams without acclaim.

About McCormick
is a global leader in flavor. With over in annual sales across 160 countries and territories, we manufacture, market and distribute spices, seasoning mixes, condiments and other flavorful products to the entire food industry including e-commerce channels, grocery, food manufacturers and foodservice businesses. Our most popular brands include McCormick, French's, Frank's RedHot, Stubb's, OLD BAY, Lawry's, Zatarain's, Ducros, Vahiné, Cholula, Schwartz, Kamis, DaQiao, Club House, Aeroplane and . Every day, no matter where or what you eat or drink, you can enjoy food flavored by McCormick.

Founded in 1889 and headquartered in USA, McCormick is guided by our principles and committed to our Purpose – To Stand Together for the Future of Flavor. McCormick envisions A World United by Flavor where healthy, sustainable and delicious go hand in hand. To learn more, visit www.mccormickcorporation.com or follow on Twitter, Instagram and LinkedIn.